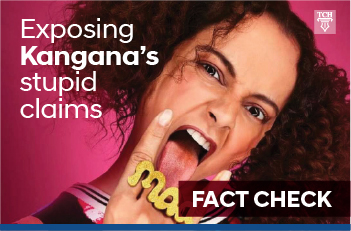 Kangana Ranaut had once again made some naïve claims. The myth of Bhagat Singh execution has been already debunked. Now coming to her claim that ‘Why Gandhi didn’t support Subhash Chandra Bose?’

Let’s check the reality of this. 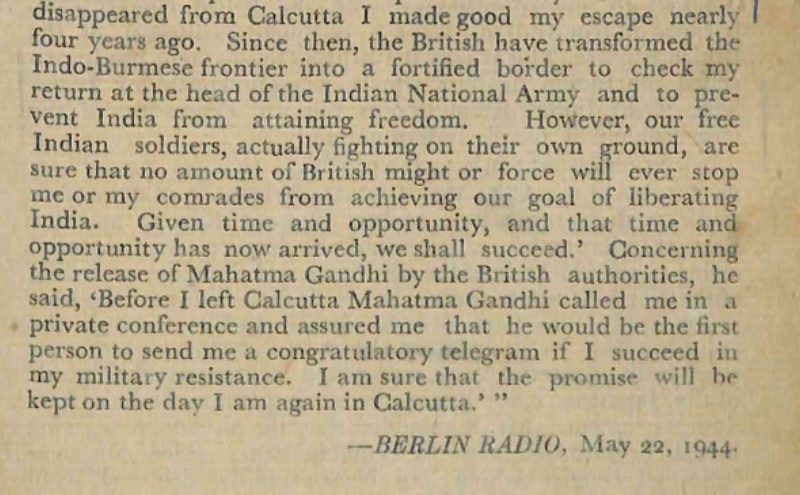 Leave everything aside, let’s see what Subhash Chandra Bose himself says on this subject. Read what he said on Berlin Radio on 22nd May 1944. Read this.

Netaji clearly said that if his efforts to win freedom for India succeeded, Gandhi’s telegram of congratulation would be the first he would receive. This clearly tells us how much mutual affection they shared.

Let’s look at his another speech given on 7 August 1943 from Berlin Radio. Read 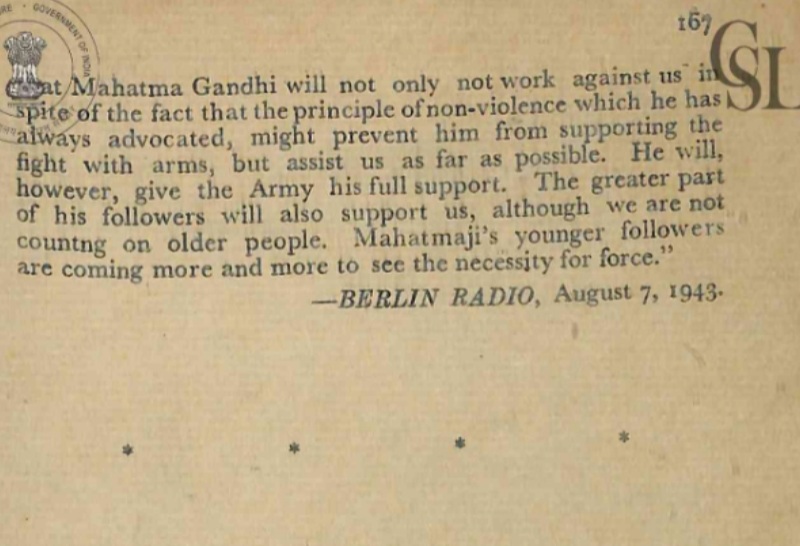 He clearly says despite Mahatma Gandhi’s inclination towards non-violence, he would assist Netaji’s army as far as possible. He further says, “He (Gandhi) would give the army his full support. He also says,” the greater part of his followers will also support us.”

Now to all those who try to make Gandhiji and Netaji enemies let me make you remember that it was Netaji only who hailed Gandhi as father of the nation for the first time. Saying such a huge thing that too from foreign soil needs courage and one can only say this when one really means it. The eye witness account of this speech clearly tells that these words came right from his heart.

S.A. IYER a very close associate of Netaji who was also a minister in Netaji’s provisional government shares an eye witness account of this incident in his book ‘Unto him a witness’ on page number 256 where Netaji hailed Bapu as the father of the nation.

On 6th July 1944 Netaji was the first one to hail Gandhi as the father of the nation.

One more point I would like to point out that out of 4 brigades of Indian national army Subhash Chandra Bose named one brigade after Mahatma Gandhi, one after Jawaharlal Nehru and one after Maulana Azad.

This clearly clears a lot of things.

Kangana made another claim that Gandhi said “turn the other cheek when someone slaps you. ”

Now first of all let me make it clear Gandhi never said this. In the entire 98 volumes of collected works of Mahatma Gandhi there is no single instance where he said this. It is written in Bible – Luke – 6:29-30 – Jesus Christ says this.

In order to shudder the Britishers Gandhi used to quote this sometimes. He only quoted it from Bible, this wasn’t his personal opinion.
Also Gandhi’s non-violence is not what most of us think. Let’s see what it really is.

Read this. Gandhi always favoured the ahimsa of the brave, not that of the meek. Read this –

Read this as well –

“I want both the Hindus and Mussulmans to cultivate the cool courage to die without killing. But if one has not that courage, I want him to cultivate the art of killing and being killed, rather than in a cowardly manner flee from danger.”

Now coming to the freedom part. Was Gandhi’s non-violence ineffective? Didn’t they get scared of Gandhi’s Satyagraha?

Let’s see what Lord Lloyd the then governor of Bombay said about it.

He (Gandhi) gave us a scare. His program filled our jails. You cannot go on and arrest people forever,you know, not when there are 320 million of them,and if they had taken the next step and refused to pay the taxes. God knows where we would have been.” – Lord Lloyd – The then governor of Bombay.

Let’s see what Lord Linlithgow the viceroy of India said.

“(On quit India movement ) By far the most serious rebellion since that of revolt of 1857” – Lord Linlithgow, viceroy of India, in a letter to Winston Churchill in August 1942
Source – Linlithgow Papers, File number 125/58, London, India office Library

“Such humiliation and defiance has not been known since the British first trod the soil of India – Winston Churchill in the house of commons in 1931.”

Source – Churchill’s remark in the house of commons can be seen in Winston Churchill : his complete speeches, Robert Rhodes James, Volume 5,pg 4,995

Some of his quotes –

“The romance of violent methods alone, which was so prominent amongst our predecessors was replaced by serious ideas. Use of force justifiable when resorted to as a matter of terrible necessity and non-violence as policy indispensable for all mass movements. “ ~ Bhagat Singh

Source – Why I am an atheist page no. 7 Srushti Publication

Apparently I have acted like a terrorist which I never was except in the beginning of my revolutionary career. And I am convinced that we cannot gain anything through those methods.” ~ Bhagat Singh

Now coming to what Gandhi’s non-violence and his satyagrah really meant.

Gandhi believed that because the Supreme Soul is present in all. The world is his light. Because of the universality of Brahman or Truth, its part is in everyone. Therefore, for his realization, a feeling of oneness with the world is necessary. It is experienced through self-realization and one who has realized self-realization cannot conceive of non-violence.

In the war against oppression, tyranny, the Satyagrahi uses such a weapon which creates a moral conflict in the antagonist and weakens his demonic nature and awakens the divinity.In short, Satyagraha is the science of fighting against unrighteousness or awakening the unconscious soul of the individual and the society.

Now I would like to conclude by a verse from the Mahabharat which clearly tells the value of non-violence.

Also as some quote, “अहिंसा परमो धर्म, धर्म हिंसा तथैव च” I would like to point out that this verse is fake. This is present nowhere in the entire Sanskrit literature, what to speak of Mahabharat alone. It was created by a someone in 20th century.

The value of non-violence can be also seen in Adhyay 372 of Agni puran and Patanjali Yog sutras.